Are you secure on your bicycle pedaling through towns, passing people, riding along streets that are clogged with traffic? Have you ever longed for your own safe zone while wallowing in your ride? That intimacy belongs to you, your bicycle and an embrace of the nature. True enough. In a dynamic town, cars are constantly moving, making it almost impossible for cyclists to pass comfortably. Take a glimpse into Malaysia’s traffic flow today, bicycle pathways are not properly designed for the avid road cyclists. However for the fellow mountain bikers, whether or not you go for a leisure one or strenuous one, this is the place for you, off-road junkies.

EVERY DISTRICT OFFERS AN OPPORTUNITY

Mountain bikers have never allowed the terrain conditions, be it bouncy, steeply, rocky or hilly, to hinder their performances, as each offers a distinct way of experiencing a ride. There is always something special to be explored.

With this in mind, mountain bikers continuously seek to explore new adventures throughout Malaysia and beyond. A small district in southwestern Sabah, Beaufort boasts unique offerings for the devoted mountain bikers. In this place, riders will escape the city’s vibrancy to cool off in the abundant bushes, and climbing up to the mountaintops in the rugged terrain next to Sabah’s iconic river, Padas River.

Beaufort is a name given to a town after a former British Governor L.P. Beaufort and is residing in the Interior District of Sabah in East Malaysia. Beaufort means “The Beautiful Fort” in old French language. The population is comprised of Malay, Chinese, Bisaya and Kadazan. During the era of World War II, the prosperity of Beaufort was rubber plantation, however as the time changes, it now produces palm oil.

Approximately 22 kilometers from Beaufort Town, Batu 60 is a local village where houses and school are built on high roads to avoid the periodic floods that arise from the Padas River. Along the high roads, there is also a railway line which extends from Tanjung Aru to Tenom. It always brings cyclists to mind that lush greeneries, the refreshing air and fluffy clouds covering the mountaintops.

On average, it takes cyclists merely three hours to finish a loop alongside the high roads. The road surface is constructed using tarmac, but it is surrounded by alpine on all sides. It has become an ultimate venue for cyclists to train for their endurances. Usually in the early mornings or evenings, cyclists can be noticed, either spinning their leisure work-outs, training for their next races, or simply taking a pleasure in the breath-taking sunrise and sunset.

NONE OTHER THAN THE CROCKER RANGE

Keep moving forward to a higher altitude. Cyclists will unconsciously grasp the magnificent Crocker Range (Malay: Banjaran Crocker), a mountain range in Sabah. It is named after William Maunder Crocker. At an average height of 1,800 meters, this highest mountain range separates the east coast and west coast of Sabah.

In 1968, the range was designated to be a forest reserve. It was then established to conserve the water catchment area for the surrounding towns in 1984, and declared as Malaysia’s first World Heritage Site. In 2014, it was recognized as a UNESCO Biosphere Reserve, becoming the second Malaysian site, after Chini Lake in Pahang. 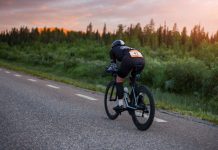 10 Companies You Need To Know Before You Go To Taipei...

Elaine Lo - December 5, 2019
0
What will we see in the biking industry in the next years to come?Let Taipei Cycle Show reveal the answers. The Asia's largest bicycle...

You Will Be Captivated by The Hong Kong Cyclothon 2018

Elaine Lo - June 20, 2019
0
You may have seen his glory, cheered for his triumph, and astonished at his mastery. The competent mountain bike coach, Fadzlee was at the...

As A Triathlon Coach, He’s Always At His Best

Brian Cheah - January 20, 2021
0
When it comes to cycling in Malaysia, people often think of highways filled with motorbikes, trucks, and cars with limited lanes for bicycles. Moreso,...

CYCLING MALAYSIA is a home grown cycling magazine owned and managed by Malaysians for Malaysians. Cycling Malaysia is the first local cycling magazine published to connect cyclists with cycling communities, cycling events and organizations contributing to the growth of cycling sport. The lifestyle cycling magazine that shapes cycling lifestyle.
Contact us: josephseow@cycling-malaysia.com

Brian Cheah - January 20, 2021
0
When it comes to cycling in Malaysia, people often think of highways filled with motorbikes, trucks, and cars with limited lanes for bicycles. Moreso,...

Brian Cheah - January 14, 2021
0
“Been wanting to ride like a professional but do not have the endurance?” Being able to ride as long as your route, cycling with friends,...

Brian Cheah - December 20, 2020
0
“Have you been experiencing lower back pain from cycling?” It is a common injury in cycling that is hardly discussed. Most cyclists experience pain or...

4 Tips You Need To Know To Start Cycling

What is Cycling Malaysia?

Optimal cycling shoe to a firm fit in your heel

Knowledge on Echelon for cyclists

Heroes on Bromo – A Ride Through Beauty And Serenity