Ernesto Colnago, and more notably the frames which bear his name, have earned an enviable reputation for success at the highest levels of the sport. This has earned the brand many fans, and Adnan Osman is no exception.

Adnan happened upon the bike by sheer coincidence, when a friend purchased a Colnago Master that was a size too small. “My friend bought this frame online, and he found that it was too small for him, so he offered it to me for what he paid for it. I didn’t think twice and bought it on the spot.”

Adnan, who is the executive director for an electrical component wholesaler, has been involved in the electrical industry since age 17. Starting with a vocational high school qualification and working his way up through the ranks, he finally attained success when he seized an opportunity to start an electrical component supply firm with his partner. This then allowed him to indulge his passion for cycling.

Starting with a Giant TCR 3 in 1998, Adnan started collecting a series of bikes that took his fancy, with a current stable of 3 road bikes, 1 touring bike and 2 folding bikes. He recently sold his MTB because, in his words, “I was starting to feel my age.”

The Colnago Master fell into his hands 3 years, when the aforementioned friend sold the frame to him. Starting with the fork and frame, Adnan began a quest to complete the bike with forays into E-bay and asking around with friends and local bike shops. “It took me about 6 months to complete the build,” says Adnan.

Adnan treats the Master as his Sunday ‘show bike’, taking it mainly for short rides with friends and for easy rides. “Compared to my carbon bike, the Master is heavy, it’s hard for me to ride far with it considering my stamina,” says Adnan with a laugh. “For me, cycling is both exercise and a hobby, and I do this for my own enjoyment. I particularly enjoy riding LEKAS, with it’s rolling hills, but it’s not too steep.” 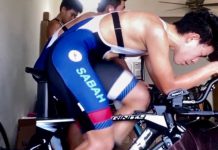 10 Companies You Need To Know Before You Go To Taipei...

Elaine Lo - December 5, 2019
0
What will we see in the biking industry in the next years to come?Let Taipei Cycle Show reveal the answers. The Asia's largest bicycle...

You Will Be Captivated by The Hong Kong Cyclothon 2018

Elaine Lo - June 20, 2019
0
You may have seen his glory, cheered for his triumph, and astonished at his mastery. The competent mountain bike coach, Fadzlee was at the...

As A Triathlon Coach, He’s Always At His Best

The Four Basic Necessities For A Bike Tour

Elaine Lo - June 26, 2018
0
Bike touring is a travel method that requires long hours of traveling on the road. It may take several years if you have decided...

Heroes on Bromo – A Ride Through Beauty And Serenity

Rejuvenating the Nature in Beaufort

CYCLING MALAYSIA is a home grown cycling magazine owned and managed by Malaysians for Malaysians. Cycling Malaysia is the first local cycling magazine published to connect cyclists with cycling communities, cycling events and organizations contributing to the growth of cycling sport. The lifestyle cycling magazine that shapes cycling lifestyle.
Contact us: josephseow@cycling-malaysia.com

Pili Wang - July 28, 2020
0
Cycling isn't the only activity of riding a bicycle leisurely but it also requires strong legs and quads to carry out the 'fat-burning activity'.To...

Pili Wang - July 27, 2020
0
We are very excited to share our new online marketing packages with you starting from 1st July 2020! The two platforms of The Sportsman...

Combination of cycling routine, strength & stretching workout pivotal for a...

Pili Wang - July 22, 2020
0
In order to be fit and mentally prepared for cycling, a cyclist needs to have a proper training routine no matter whether he or...

The Right Choice The 720 Armour guide to choosing Sports Performance...